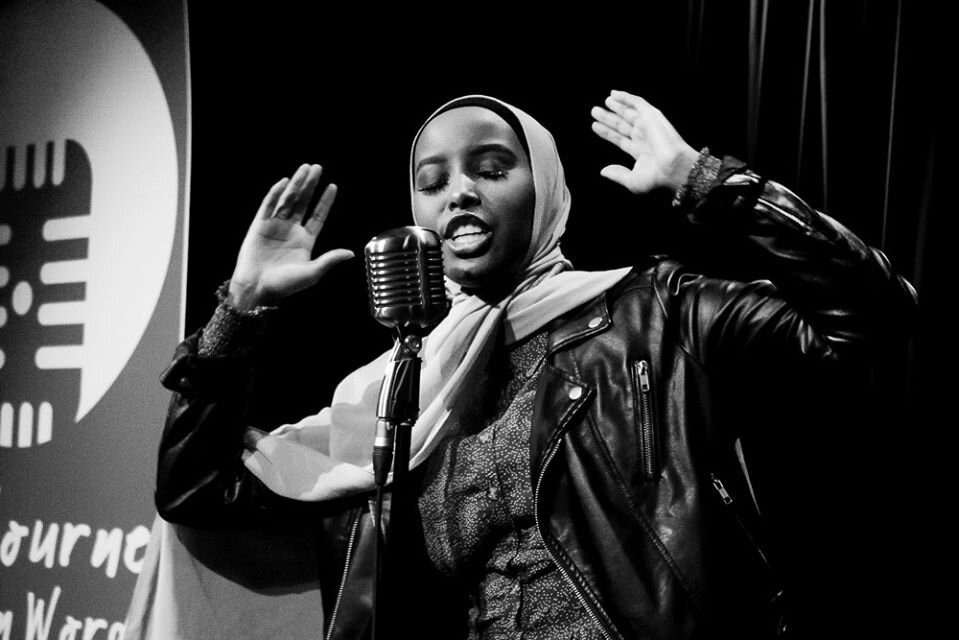 Every time Zaynab Farah smiles, I catch a glimpse of straight teeth behind braces. At 21 years, she is in her fourth year of chemical engineering. She wears a black hijab tucked neatly under the nape of her hoodie. Like a true millennial, she orders a fancy coffee before we sit down to chat.

Zaynab is an award-winning spoken word artist. She describes her performances as something between rap, poetry and public speaking.

She recalls the first time she performed in front of an audience. It was at a high-school assembly, to a combination of students, staff and parents. “At first I was a little nervous about forgetting my lines and how people would react,” she says, “but after I got up on the stage and started my piece, my fear disappeared.” Afterwards, several audience members approached her. They told her how moved they had been by her performance. Realising she perhaps had a talent for storytelling, she spent the next years refining her craft.

A vulnerability that’s worth the risk

Whilst Zaynab has come a long way since then, she still gets nervous before a performance. “It’s a very vulnerable thing,” she says, “you never know how strangers will take it.” Although audiences have been overwhelmingly supportive, she has still faced criticism along the way.

After winning a recent spoken word competition, an audience member told her that she “didn’t deserve to win.” However, she has refused to let this criticism discourage her from continuing to perform. “The way I see it, no matter how hard I try and no matter what I do, there will always be some people who will look at me in a negative light.” Regardless, she says, performing is ultimately a “vulnerability that’s worth the risk.” 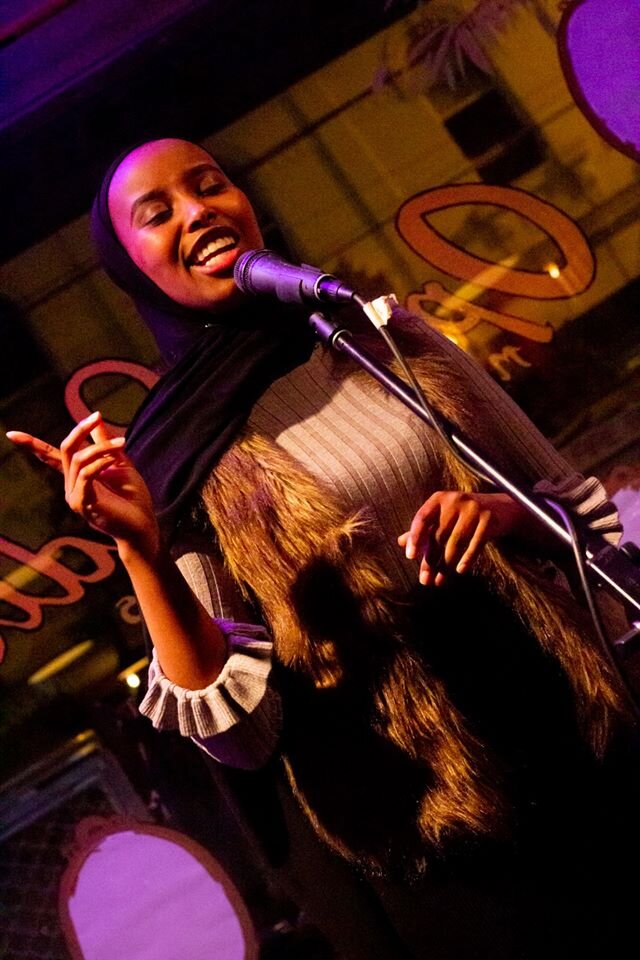 Zaynab’s parents were Somalian refugees and have lived in Australia since 1996. She learned to use poetry as a tool to navigate the “complexities of growing up as an Australian-Somali” and connect to her cultural roots. “Verbal storytelling is a major part of Somali culture,” she says, “It’s a way of connecting to the elders.” Although she is fluent in Somali, Melbourne is the only home she’s ever known. Particularly when she was younger, her cultural and religious background made her feel like an outsider.

“I was always caught in this grey area between my identities as an Australian and a Somali,” she says. “In an ideal world, maybe people would see me as both. In reality, it means that I’m not either.” Through writing, she realised that the two didn’t have to be mutually exclusive. “The more I write the more I learn about myself,” she tells me.

Growing up black and muslim

Growing up black and Muslim, Zaynab has often fallen victim to unfounded stereotypes. “People try to tell me who I am based on a single trait,” she gestures to her hijab, “but I’m so much more than that.” Many of Zaynab’s performances challenge the negative perceptions about her community including her piece, ‘Boxes.’ “You had the audacity to take away my individuality,” she says in the performance. “I may be black, but the only thing I steal is a quick glance in the mirror before I leave.”

She explains that this piece addresses how “dehumanising” it is when society profiles her. “Every time I walk into a space everyone already has an idea about who I am,” she says, “but they don’t even know me. Maybe if they took the time to talk to me, they would find out that I’m not oppressed, I’m not a monster.”

Performing also allows Zaynab to reclaim the stories that were stolen from her. “Stories are powerful. They can also be dangerous.” During the 2013 ‘Stop The Boats’ Federal election, the negative stories about Islam and refugees caused intolerance towards her community. One of Zaynab’s aunties was physically assaulted while returning home to her apartment flat in Carlton. A man entered a lift she was in and violently attacked her. He tried to rip off her niqab, screaming, ‘This is Australia.’

This was an incredible traumatising incident not only for Zaynab’s aunt, but her whole community. “from that day forward she had fears about being alone in lifts with men she didn’t know,” Zaynab tells me, “for my family it was a sad and scary time.” During the period after, several of her family members and friends changed their niqabs for more socially-acceptable hijabs. Some members, including her aunt, even went without a covering altogether. This was among the experiences that inspired Zaynab’s award-winning piece, ‘She is Light.’ 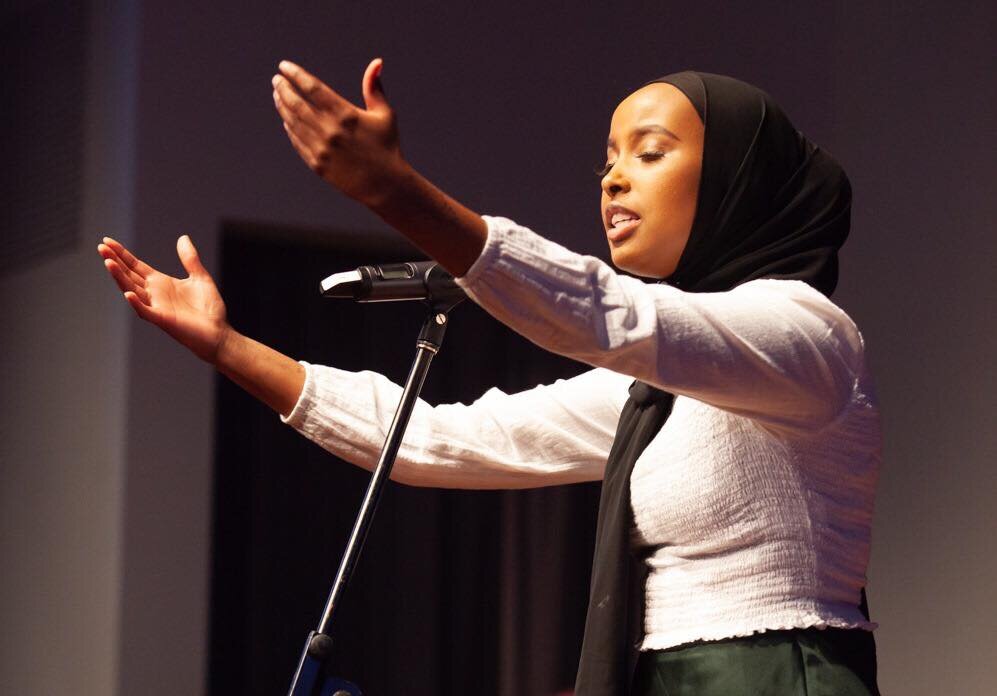 This performance is about the assumptions people make about her mum, a woman who she describes as “so much more than just her covering.” Unlike Zaynab, who wears a simple hijab, her mum wears a niqab, which is a full covering that only shows her eyes through a small slit in the fabric.

In the performance, she says, “everything about her (Zaynab’s mum) screams oppressed, you have all of these questions…but rather than asking her…you take it upon yourself to form answers.” Zaynab tells me that whilst people “tolerate” her hijab, the hatred for women who wear niqabs is “appalling.”

Zaynab recalls shopping with her mum at Highpoint Shopping centre. At the time, she was only in her mid-teens. An older woman approached them, hissing, “go back to where you came from, you don’t belong here.”

Zaynab says, “people are waiting for me to slip up so that they can validate their assumptions about people like me.” She feels the need to be “extra nice” to avoid repercussions for her whole community. “In my world, you are guilty until proven innocent,” she says in her performance, ‘Boxes.’ Through performing, she can express the anger that she’s learnt to suppress.

In the face of this discrimination, Zaynab turns to storytelling. “Everyone likes stories,” Zaynab tells me, “and there is power in creating a story that people can relate to or understand. Sometimes you can find an unexpected connection in this way, which is all that’s needed to challenge people’s assumptions.”

Stories also allow her to form connections with people who seemingly have nothing in common with her. “People often approach me at events and remark on the power of my poetry,” she says. A woman who has attended many of Zaynab’s performances told me, “hearing Zaynab speak allowed me to gain an insight and understanding into issues that I have never personally encountered.”

In the future, Zaynab dreams of performing globally. She wants to show the children in her community that “their stories matter and they can do anything despite the stigmas they carry.” Until then, her talent continues to challenge assumptions about what it means to be Australian.

As she most profoundly says, “I may be black. I may be Muslim. I may be a woman. But at the end of the day, I’m just Zaynab.”

Is the Future of Democracy Digital?

How Will Social Media Change Politics & Democracy in Australia?

COVID-Infected Dreams? You’re Not the Only One.